“Music is the beginning and the end of the universe. All actions and movements made in the visible and invisible world are musical. ”(Hazrat Inayat Khan Sufi master)

"The flute is as old as the world." (Old saying of the American Indians)

A study carried out with the aim of exploring the healing potential of music played through Native American Flute, on various cases of deep trauma, presented an interesting point of view on the flutes, on the sacred music of the ancient peoples and the deep respect of these peoples. for the knowledge coming from the ancestors and the subtle invisible worlds. Research has shown that there is an unexplained field within this ancestral musicality, which definitely seems to affect layers of the subconscious and assist in treating trauma and disorders initiated during childhood.

These traumas trigger a disorder called "dissociation" in which the individual presents a state of deep disconnection with the world around them, as when we claim to feel "overwhelmed" with difficulties in concentration, anxious but this disorder being a permanent state that can last a lifetime and trigger various symptoms like panic, depression, outbursts of anger, nightmares and even amnesia.

The belief in the power of music is universal. Music is identified with the beliefs of the creation of the world and has been used for prayers and healings in ancient mystical and indigenous traditions throughout time and culture. Shamans, philosophers and mystics see music as a balancing, unifying and healing force. The use of music for healing can be traced back to the beginning of recorded history.

A nurse, Margaret Anderton, at the end of the First World War, worked with wounded Canadian soldiers. She described the treatment of “war neurosis” with music. She stated that “The memories were brought back to men who suffer from amnesia; acute temporary insanity eliminated; paralyzed muscles restored. ” She described one captain in particular, "Which was launched into the air and then buried in the rubble with a bomb explosion and was never able to remember even his own name until the song restored him". This initial work was carried out with veterans who would probably now be diagnosed with Posttraumatic Stress Disorder, exhibiting symptoms of dissociation.

It was after the Second World War that the therapeutic use of music was formally called "music therapy". It was used to deal with the trauma of combat, used successfully in reducing depression and helping to return dissociated memories 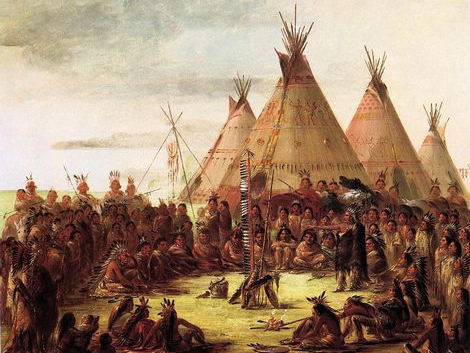 To describe the importance of music in these ancient cosmologies, it is important to recognize the different beliefs and their myths about the creation of the world. In this way, we identify the universal concept that the world emerged from “sound”.

"One Word, and the entire Universe began to exist."

"And God said" Let there be light "and there was light"

"Consequently, with that Word, with that Being, he brought this whole universe, everything that exists."

There are many Native American tribes and therefore many beliefs about creation. However, there is a belief in many Native American traditions that this world was "brought into existence by sacred songs". During the Hopi Flute Ceremony, there are songs for “emergency” situations in the world. When “emergency songs” are sung, reed flutes are used. It is important to note that both “sacred music” and “flute” are connected in this auspicious ceremony.

Natalie Curtis, who studied Native American music in the late 1800s, described that all things have a "soul" and everything has its own sound or music.

Hazrat Khan, Sufi mystic and master, also described that each person has his own sound. Human beings, both in physical form and in spirit, are a sound or a song.

In the description of a Navajo healing ceremony, a concept of Unity is illustrated:

“Physical and mental illness is the result of disturbed harmony. On the other hand, the cure for the disease is to restore the patient's harmony. This is the objective of the Navajo ceremony - to seek the preservation or restoration of harmony ”––Bahti

The flute, in many stories, legends and ancient traditions, has been associated with magic, mysticism and the capacity for transformation. It is easy to remember “The Flautist of Hamelin”, the “Magic Flute” by Mozart, Krishna and his flute. The flute's ability to induce trance or alter states of consciousness was described by Plato and Aristotle. Bone whistles and flutes were discovered in the temple of Apollo at Delphi and Apollo is considered a god of music and a god of healing. 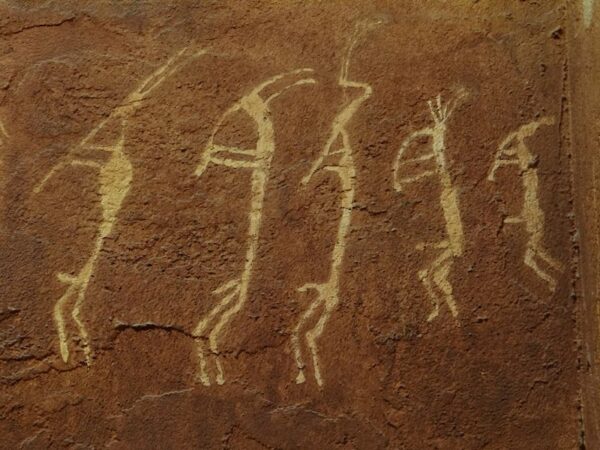 There is an old Native American saying that says, “There has always been a flute, just as there have always been young people. The flute is as old as the world ”. Archaeological discoveries can give credence to this saying, because even today the flute is documented as being the oldest instrument discovered.

There is a well-known image of a hunchbacked flutist portrayed in the ancient rock art of North America. This image has been described as the “rain priest”, “divinity” and “shaman”. All of these beings are identified as having supernatural abilities.

In myth, legend and practice, the Indian flute is described in terms of sacred, healing, transformation and love. In a Dakota legend, the flute was brought to humans by the supernatural “Elk People”. It was "imbued with the sounds and the power of all living things ..." and expressed "the divine mystery and the beauty of love".

The Native American flute is a unique musical instrument, according to the oldest legend. It is imbued with ancient Indian and mystical spiritual traditions, beliefs include the flute to the power of sacred music. It is these songs, these prayers, that are used to maintain and restore the delicate balance of harmony when he is out of balance. To heal with “songs” and prayers is to keep in harmony something as vast as the cosmos and apparently as limited as an individual.

This research was carried out with adults over 18 years old, between men and women. One group had different types of dissociative trauma and the other group was opposed by adults without trauma. For both groups, tests were performed with a specific sacred song played on the Native Flute and Another new age “placebo” song.

RESULTS OBTAINED (Responses of participants when listening to the native flute)

“How can people feel that way? I would like to have this instead of Xanax… I feel so good. It felt like when I took morphine ... heaven ... something totally peaceful. It must be like when people die. ”

A participant in Dissociative Disorder described having recurring and uncomfortable dreams about bears that were chasing her. During the experiment she described that while listening to the music of the flute the bears started to chase her again and she ran, but this time they reached her. She declared her surprise and happiness that by taking it, they held it and protected it.

Shamanic Features Identified in the Survey

There are four characteristics of the work done through shamanism, as described in Eliade's academic work.

The responses obtained from the analyzed participants related to the shamanic characteristics:

“I took myself to the forest at night. I had animals protecting me… ”

"I was in contact with nature, the sky, the wind, as an evocation of all those things". "As if I were a wolf howling at the moon."

Related to the Spirit:

A participant in dissociative disorder reported hearing the words "Come home, come home" and "It's safe ... so the body can feel peace". When asked: "What do you think you are: come home?" She answered: "It was about my soul ... for her to come home."

A participant in the Group of participants in the research without trauma, reported that she returned to a life lived in Africa, one hundred and fifty years ago, during her mother's funeral. This participant appeared to be of African American descent, although she said she had never been to Africa. She described the flute music as being “ceremonial” and how the experience was “beautiful”. She repeated how peaceful and beautiful the "ceremony" was.

There seems to be an anthropological parallel in the concept of "soul loss", present in several indigenous cultures in the world with the dissociation disorder linked to trauma. For indigenous culture, the loss of the soul can be partial or total. In psychology, this is described as the loss of memory, affection or a sense of personal identity. In indigenous cultures, the process of reconnecting to your self is often aided by a shaman, in soul rescue practices.

Shamanism, considered one of the oldest forms of healing, continues to use “sounds” and “music” to communicate and access the spirit world, and this type of use of music for healing is still practiced today in various tribal societies and not technological around the world.

The Importance of the Musician

How significant is the flutist? A significant number of survey respondents reported having previously heard another Native American flute song, describing that that particular song affected them differently, more actively. The extent of the healing effect has something to do with the flutist, his attitudes and intention, it seems to be something beyond the technique and ability to play. Further comparative research will assist in this determination.

Hazat Khan, a Sufi mystic wrote about the influence and characteristics of sacred music. He also wrote about musicians. “The effect of the music depends not only on proficiency, but also on the evolution of the performer. Its effect on the listener is in accordance with his knowledge and evolution; for this reason, the value of music differs in each individual. ”

There are significant ethno-musicological implications of the study to be explored later. But through this experimentation it was identified that through what can be qualified as a shamanic or sacred sound, a return to totality (that is, interconnectivity) can be enhanced by experiencing different states of expansion of consciousness. The search for wholeness can be guided by a psychologist or through the search for more subtle paths. The sound plays deeply, going far beyond words and intellect. Throughout this study of music and ancestral flutes, the conceptual paradigm of dissociative disorder can be expanded by being understood not only as a psychological orientation, but also as a spiritual misalignment oriented within a transcultural worldview. Dissociation, the human mind, the concepts of spirituality and consciousness can begin to be explored and understood in ways hitherto unforeseen, through sound.