THE FLUTE IS THE SYMBOL OF THE SPIRITUAL CALL, THE CALL OF DIVINE LOVE.

Unlike many other great Indian artists, Pandit Chaurasia does not come from a family of musicians. Instead, music is a path he found for himself and he struggled hard to overcome all the obstacles that came his way to successfully emerge with his courage, sincerity, hard work, devotion and dedication. He started his musical quest at the age of 15, learning classical vocal technique with Pandit Rajaram. He did this secretly, hiding from his father, who wanted his son to carry the family legacy of wrestling. The first time Chaurasia was paralyzed by the magic of the flute was when he heard Pandit Bholanath on the radio. 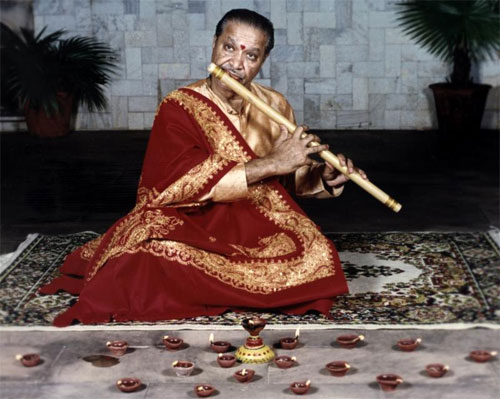 The sound of the flute was so beautiful. This transformed the environment around me. I thought I should go, touch your feet and surrender to that song. I took my friend's bicycle and drove to the AIR station, where Pandit worked, and waited. When Pandit left, I fell at his feet and told him why I came. He needed someone to buy vegetables, groceries and run errands. He taught me whenever he found time. This went on for eight years. It was the beginning of my musical journey.

In 1957, barely out of his teens, he became a regular artist for All India Radio, Cuttack in Orissa, where he worked as an interpreter and also a composer. From here began his musical journey that took him across the globe. Transferred by AIR (All India Radio) Cuttack to Mumbai in 1960, he received additional guidance from musician Surbahar Shrimati Annapurna Devi, daughter of the late Ustad Allaudin Khan and sister of Ustad There Akbar Khan. Under his guidance, his music took on a new dimension and he left AIR to pursue his artistic career. Since then, Pandit Chaurasia has been performing nationally and internationally, being acclaimed by varied audiences and fellow musicians such as Yehudi Menuhin, Jean-Pierre Rampal, among others. Pandit Chaurasia tours regularly in the United States and Europe and is a featured artist at almost every major music festival around the world.

Pandit Hariprasad Chaurasia, says that his only ambition is to popularize music for flute, there is a very important reason why Chaurasia still travels. For him, it is part of a mission that he believes has no end - popularize the bamboo flute (bansuri).

This is my pooja. The long hours of training when I started, the constant trips to small towns for festivals, even the regular preparation before a concert is to make the flute sing beautifully. I want the flute to be in the spotlight. Today, the flute is an important concert instrument that dominates the musical circuit; the status of the other instruments was granted. That has been my contribution and I am working to keep it alive.

As a musician, Pandit Chaurasia is a rare combination of innovative and traditionalist. He significantly expanded the expressive possibilities of classical North Indian flute through his masterful blowing technique and his unique adaptation of alaap and jod to the flute. His mastery of the flute, the new techniques he introduced and the traditional dhrupad “barhat” style of the Senia Maihar tradition to which he belongs and which popularized decades ago, led to a new generation of flutists.