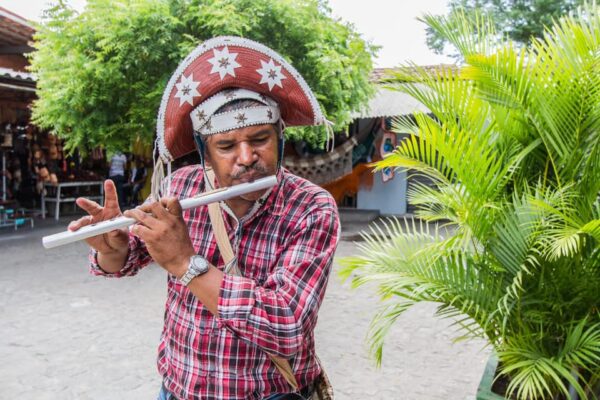 On December 8, 2020, the master Edimilson do Pífano, went to unite and rejoice the stars in the sky! Leaving for us, a legacy of joy, dedication and love for the northeastern tradition of the fife and Brazilian popular music. Edmilson Ferreira da Silva (1960-2020) is considered a master of the fife (transverse flute from Brazil), a great artist in the universe of flutes of the Pernambuco culture. Born in Lajedo, from Pernambuco, son of farmers, his father, José Felix da Silva, taught all his children the art of the fife that he inherited from his ancestors. Just as he also inherited the fife band called Flor de Taquary, and with that, these traditions were passed on from generation to generation. Edmilson was already playing with his father in the band at the age of 10, but at the time he played deaf, the name given to zabumba, he started playing his father's instrument as a joke, but he developed fast and at 15 he was already performing in the city playing the flute. At the age of 20 he decided to move to São Paulo in search of better opportunities. He started playing at Praça da Sé, his music was new in Sp at this time and was very successful, he played in several concert halls, he was part of fife groups and bands, but in the 90s, at the age of 30 he decided to dedicate his time entirely his career as a solo instrumentalist and started recording his first album and returned to Pernambuco.

The master has accumulated 50 years of artistic trajectory, in addition to more than 25 recorded discs and hundreds of compositions made. In the last few years he lived in Caruaru, where he made and sold fife, in addition to doing shows. He was part of the Orchestra of Pífanos de Caruaru, attractions guaranteed every year at São João da Capital do Forró. And the band of Pífanos Flor do Taquary, inherited from his family and that continues to perpetuate this rich culture.

The fife bands are relics of the Caruaru culture. A city that stands out in the field of culture, being an important cradle of folk music, from where many of the country's greatest fife masters arose. And thanks to this beautiful art that has been preserved for generations by many artists like Edmilson, we can see the magic of the flutes happen. The fife, this very delicate instrument, with a sound that sounds like the song of birds, has been providing recognition to these artists across the country, but the most beautiful thing that we see in these artists is that what makes their art so rich is above all the artist himself and his simplicity in bringing joy, prayer and dance to all those who appreciate the art of being happy.

Here we leave our gratitude to the master Edimilson for his beautiful journey!