Sound and Healing, Sound and Spirituality

Tito La Rosa is a descendant of the Quechua Indians of the Peruvian Andes. For many years it has been rescuing and preserving, studying and intuiting the ancestral music of Peru. He is also a “Curandero del Sonido”, a healer of sound, who enters an altered state to produce uplifting sounds, allowing healing and balance to occur.

The ancient Andean wisdom teaches us that the Earth was made while the creator sang, therefore all beings are made of sound, rhythm and harmony. Through its concerts, flower ceremonies and music lessons, La Rosa helps awaken our memories (ancient memory), weaving sounds into frequencies that open the heart and encourage the spirit to fly. Titus makes, with his instruments and his divine breath, a bridge between the ancestral and the contemporary, between heaven and earth, matter and the divine.

La Rosa recorded with Mary Youngblood on the Silver Wave label. His 2002 CD, “The Prophecy of the Eagle and the Condor”, was nominated for a Native American Music Award for Best Recording of Music in the World.

In the work of the 9 doors of Escola Peruana Del Sonido Curador, Tito La Rosa uses several instruments to develop the process of sound healing through the 9 doors. Tito explains what the Peruvian School Del Sonido Curator is:

Escola Peru is a group of sound curators, medicine men, women who read the oracle and my ayahuasqueira teacher Amélia Panduro. A group of people who were feeding me and forming this sound healing proposal through the 9 doors.

Among the instruments used in this work of the 9 doors, there are several types of flutes that are used at the times of doors 4, 5, 6, 9 and also at the end of the ritual.

The 4th moment is the work with the Mother. Why? Because there is its origin. It turns to the Mother, it is the only way, the relationship with the Mother, with her origin, with the grave, with the uterus. The 4th moment, the 4th door is the mother of flutes, Mama Quena. Always when touching Mama Quena put an intention. Intention is an energetic vibration and intention has to be accompanied by Munay (energy of love). If the intention is not accompanied by Munay, an expression of love will not be transformative. The intention is always accompanied by a very affective charge of the energy of love. The intention is that you refer to the Mother. The sound touches your central cavity, your belly, your chest, your hands a lot. And the intention you produce communicates with you on a cosmic, magical level. Your mind probably won't understand but your body will because your body has other channels that communicate cosmically, that's why the intention is important, but it has to be an affective intention from Munay, from the heart of the sound. 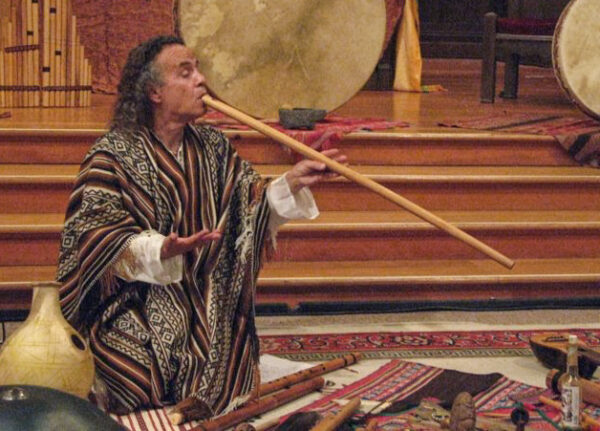 “The 5th moment is Munay, love. To open the energy of love, and here the love flute is played, the double flute, which has a male and a female vibration and when played together at some point they integrate and work the energy of love. Love as the most luminous vibration in the universe. For what? To heal from the heart of sound, from Munay.”

In the 6th moment, 6th door, we work on a male instrument, the Abuelo flute. Its characteristic is to express itself through harmonics. It has a central sound and from it we have treble and bass harmonics. It usually has seven harmonics, sometimes six. It refers to its roots, its identity. It is a rod of power, a staff, it works your center, your power, your male lineage. It works all this through the harmonics. I work a lot on the sound of her tapping her flute on the floor like a staff. Because? Because you have to be grounded, not everything is cosmic, it has to be grounded, grounded. I connect a lot with my grandparents, with my ancestors. It is the flute of the Abuelos. It's a sound that works a lot on the spine and on people's old memories. The column is the place that receives the sound better, they say that the column is the home of its sound, that it was lodged there. The Abuelo flute works a lot on its old memory, its belonging, its roots, its male lineage, its power.

“On the 9th door we incorporate the classical Hemispheres flute and another one that I use is the constant sound flute, the Pedal flute. A flute that doesn't give us a name so you can put any name. A flute that has a constant sound and within this constant sound the other sounds lodge and together produce harmonics. It is now a time to close, to prepare for the closing of the session”.

At the end, I use the Lua or Shamanic drum and at times a Native American flute can be used in F (frequency of Earth) lower. With the native flute one returns home, the lowest one used to return home. 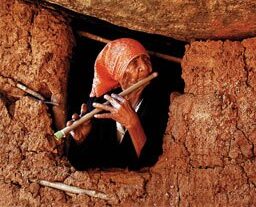 The Origin of the Fife

We use cookies on our website to provide you with the most relevant experience. By clicking “OK”, you agree to the use of all cookies. You can visit "Settings" to provide controlled consent. Read more
settingsOK
Manage consent

This website uses cookies to improve your experience as you browse the website. Of these, cookies categorized as necessary are stored in your browser as they are essential for the basic functionality of the website to function. We also use third-party cookies that help us analyze and understand how you use this website. These cookies will be stored on your browser only with your consent. You also have the option to disable these cookies. But disabling some of these cookies may affect your browsing experience.
Required Always Enabled
Necessary cookies are absolutely essential for the proper functioning of the website. These cookies ensure basic functionality and security features of the site, anonymously.
Functional
Functional cookies help to perform certain functionality, such as sharing website content on social media platforms, collecting feedback, and other third-party features.
performance
Performance cookies are used to understand and analyze key site performance indices, which helps to provide a better user experience for visitors.
Analytics
Analytical cookies are used to understand how visitors interact with the website. These cookies help provide information about metrics like number of visitors, bounce rate, traffic source, etc.
Advertising
Advertising cookies are used to provide visitors with relevant advertisements and marketing campaigns. These cookies track visitors across websites and collect information to deliver personalized advertisements.
Others
Other uncategorized cookies are those that are being analyzed and have not yet been classified into a category.
SAVE & ACCEPT
Powered by