This maraca is made with coconut and inside the maraca are placed pariri seeds or brazilwood seeds. Due to the hard shell of the coconut, the Pataxó maraca has a very high power of vibration reaching treble that is possible to hear from a great distance.

As it is a handmade instrument the colors and designs may vary from the image you are seeing on the website. The shipping period is 7 days after approval of the order. The maraca will be sent with assorted design, it is not possible to choose the design, each model is unique.

Maraca for the Pataxó people is a means of communication. When in the villages there are meetings between chief and community, the maraca has the main function! At meetings when a person wants to give an opinion, she raises and shakes the maraca, then the leader, chief or shaman will understand that that person wants to speak and everyone will be silent to listen.

The maraca is also used in classrooms by the teachers to draw the attention of the student who is disturbing the explanations and thus asking for silence and attention.

Maraca is used in rituals, ceremonies and dances. In the corners it is used to express joy with the soul and energy in conducting the ritual. The way the leader shakes the maraca sets the rhythm and everyone who follows already knows what the direction of the singing and dancing movement will be according to the way of shaking the maraca.

The maraca is also part of the rituals of healing and spiritual work by the shamans that help in the spiritual connection and purification of the subtle fields.

There is a corner for the maraca that looks like this:

I sing is for Tupã
for Tupã to help me 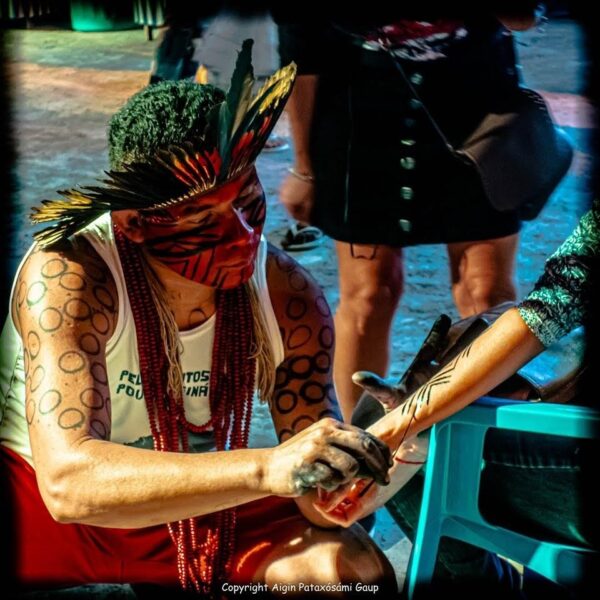 The graphics of the maracas is created by the friend Paraci Pataxó.

About the Pataxós:
“The Pataxó live in several villages in the extreme south of the State of Bahia and north of Minas Gerais. There is evidence that the village of Barra Velha has existed for almost two and a half centuries, since 1767 (see History of the occupation). In contact with non-Indians since the 16th century and often forced to hide their customs, the Pataxó today strive to enliven their Patxohã language and rituals "from the ancients" like Awê. (via: https://www.pib.socioambiental.org)

Could you name it?

We use cookies on our website to provide you with the most relevant experience. By clicking “OK”, you agree to the use of all cookies. You can visit "Settings" to provide controlled consent. Read more
settingsOK
Manage consent

This website uses cookies to improve your experience as you browse the website. Of these, cookies categorized as necessary are stored in your browser as they are essential for the basic functionality of the website to function. We also use third-party cookies that help us analyze and understand how you use this website. These cookies will be stored on your browser only with your consent. You also have the option to disable these cookies. But disabling some of these cookies may affect your browsing experience.
Required Always Enabled
Necessary cookies are absolutely essential for the proper functioning of the website. These cookies ensure basic functionality and security features of the site, anonymously.
Functional
Functional cookies help to perform certain functionality, such as sharing website content on social media platforms, collecting feedback, and other third-party features.
performance
Performance cookies are used to understand and analyze key site performance indices, which helps to provide a better user experience for visitors.
Analytics
Analytical cookies are used to understand how visitors interact with the website. These cookies help provide information about metrics like number of visitors, bounce rate, traffic source, etc.
Advertising
Advertising cookies are used to provide visitors with relevant advertisements and marketing campaigns. These cookies track visitors across websites and collect information to deliver personalized advertisements.
Others
Other uncategorized cookies are those that are being analyzed and have not yet been classified into a category.
SAVE & ACCEPT
Powered by