Pan, an ancient deity, was the guardian of the flocks and had the mission of making them multiply. God of woods and pastures, protector of shepherds, came into the world with the horns and legs of a goat. Son of Driope, one of the Pleiades, and of Hermes, the messenger of the gods, being considered the intermediate god, it was natural that he established the transition between the gods of human form and those of animal form.

However, Pan was abandoned by his mother at birth, terrified of his strange formation, with goat's feet and horns on his forehead and a thick beard. When Hermes took his son to the temple, everyone on Olympus ridiculed the child. In view of this, Hermes asked that the child never call him father.

It was dreaded by all who needed to cross the forests at night, for the darkness and solitude of the crossing provoked sudden dreads, devoid of any apparent cause, and which were attributed to Pan; hence the name panic. The Latins also called him Fauno and Silvanus. The nymphs mocked Pan incessantly because of his repulsive face, he made the decision never to love. But one day, wanting to fight hand to hand with Eros, he was defeated and slaughtered in front of the laughing nymphs.

Traveling through the woods he found the nymph Syrinx, daughter of the God-River Ladon, Syrinx had never wanted to receive honors from the deities and had only one passion: hunting, but Pan fell madly in love with her. Owner of great beauty, Syrinx was used to fleeing from the onslaught of men and gods. But with Pan it was different. He had the ability to run through forests and mountains for long periods without tiring, and he chased Syrinx for days through valleys, hills and forests. Exhausted and unable to escape his clutches any longer, the nymph ran to the riverbank, asking for help from her father and her sisters, the Ladônides nymphs. Moments before Pan's arms wrapped around her body, she disappeared into thin air and turned into wild reeds.

Enraged, Pan broke the reeds to pieces. A strong wind blew through them and the sound emitted sounded like the sweet melody of Syrinx's voice. Filled with pain and melancholy, the satyr collected some of the pieces of reed, bound them with wax and threads, and built a flute, known from that day forward as the flute of Syrinx or flute of Pan. According to mythology, he never left the instrument, which represented his lost love. 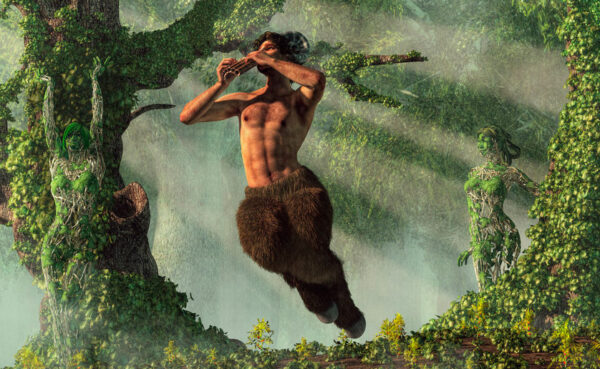 Cupid announced to him that the flute's amorous sounds would attract, despite his grotesque appearance, the beauties who disdained him. Indeed, soon, the melodious sounds of the flute attracted from everywhere the nymphs who came to dance around the horned god. The nymph Pítis was so tender that Pan was reborn with hope, believing that her talent would make her face forgotten.

Always playing the seven-tube flute, he began to look for solitary places and finally noticed a craggy rock on top of which he decided to sit down. Pítis follows him and in order to hear him better, he gets closer and closer. Pan, seeing her so close, thinks the time is right to speak to her. Pítis was loved by Boreas, the terrible north wind, which at that moment was blowing with great violence. Seeing the beloved, he had a fit of jealousy and not holding back, he blew with such impetuosity that the nymph fell over the precipice. Immediately Pitis' body was turned into a pine tree. Pitis in Greek means pine, consecrated to Pan. For this same reason, in the figured representations, the head of Pan is crowned with pine branches.

However, Pan's destiny was to love without ever being able to unite with the beloved creature. Continuing to make music on the mountain, he heard at the bottom of the valley a tender voice that seemed to repeat his melodies. It was the voice of the nymph Echo, daughter of Air and Earth. Though he followed her and she responded, he could never reach her. So Pan resided in caves and roamed the valleys and mountains, hunting or dancing with the nymphs, always carrying a flute with him.

Pan is also a figure associated with the world as a whole, as it is the representation of what is meant by nature and the universe. He was represented as a god in neo-pagan religion, whose spirits interact with nature. In the Middle Ages, the Catholic Church associated the god Pan with the Devil.